Why McDonalds is Good For Business 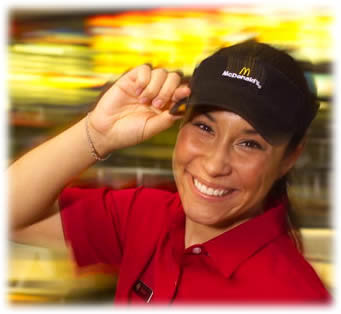 Structure and consistency are keys to good business.

We’ve previously talked about how important routine and structure is to managing your productivity. It is also something we cover in detail in the Monitor and Manage Small Business Operations subject of our Small Business Management Course. But there are still so many businesses missing out on the financial gains that operating a truly structured business offers!

The Maccas Model : Structure and Success

McDonalds is one of the best-known restaurant chains in the world. And even if you don’t like to admit to eating there, you can’t argue with the fact that it’s also one of the most profitable.

McDonalds is a success for one reason and one reason only: structure. McDonalds has a system, a procedure, a way of doing everything — and it’s all timed. A McDonalds executive knows the operations of a McDonalds restaurant down to the seconds it takes to fill a large cup with Coca Cola — 45 seconds.

But how does this make McDonalds so highly profitable, you might ask? Because with structure, comes predictability and consistency. By knowing exactly how long it takes to fill a large cup with Coca Cola, a McDonalds exec knows that a member of staff thus has enough time to fetch the customer’s Big Mac and fries while the cup fills.

By knowing this, they know how many staff members they will need to have rostered on to work on any given day. This is integral to ensuring that during busy periods, the time a customer is waiting in a queue is minimal — long wait times increases the likelihood a customer will leave and go elsewhere. It also means they won’t find themselves overstaffed during downtimes and paying staff when they’re not needed.

Where Consistency Kicks In

This is where the consistency part comes in. Any time you visit a McDonalds restaurant you know exactly what to expect — from the sugary taste of your burger bun down to the syrupy mouthfuls of Coca Cola, it’s always the same. Watch the kids behind the counter: they start with the drinks; then they get the burgers; then the fries. It’s always the same method, the same structure, every time.

That’s why McDonalds is successful. Customers know exactly what they’re getting from the moment the idea to go to McDonalds enters their mind, and McDonalds delivers every time.

When I was at university, we studied the McDonalds business model, and in particular the McDonaldization of Society (of which there’s a very interesting research paper of the same name, written by the American sociologist George Ritzer) that has occurred as a result of McDonalds’ unprecedented success. Certainly, on a grand scale, the McDonaldization of society has its problems — mostly that it’s not necessarily conducive to quality (you wouldn’t McDonalds a 4-star culinary delight, for example). However, structure is still the key to operating a successful business.