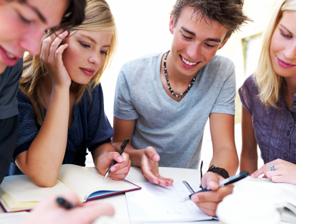 Part of writing a business plan in our Small Business Management Course, is that you have to research the market, and by doing so, you come to learn a little bit about the other businesses in the marketplace that you’ll eventually come to compete with.

Is Competition Scaring You?

For Michelle Stone, the Australian Small Business Centre’s latest recruit and former EzyLearn student, discovering that there were other businesses in her immediate area offering the same services, was daunting.

“I was really afraid that I wouldn’t be able to compete,” Michelle admits. “I thought to myself, ‘Why will anyone do business with me — I’m a nobody’.” But the more she progressed through the Small Business Management Course, the more she came to realise that a little competition is healthy competition.

“I soon realised that at least there was a market for my services; that people were willing to pay for what I had to offer,” Michelle says, now.

Fear Can Be Healthy

Michelle’s fear of competition is not uncommon among new business owners, and it’s not a bad thing, either; providing you don’t let it consume you. For many new business owners, they’re so wrapped in their idea that they forget to consider the possibility that it might not go swimmingly well right from the start.

“Before I started researching the market, I had no idea that any other businesses like mine existed in my area,” Michelle says. Fortunately, she did look into this as part of writing her business plan, and although it momentarily worried her that she might not be able to compete, she has now put steps in place to make herself more competitive, especially as a new player in the mix.

Setting Your Price: Breaking Even

“That’s where I learned so much about breaking even,” Michelle says. “Before that module in the course, I had no idea what I needed charge and how much business I needed to turnover just so I could break even.”

Michelle, who originally studied an MYOB training course with our sister training provider, EzyLearn, so she could help her father run his business, says that breaking even is something that many business owners probably overlook.

Michelle says her own father, who had been very successful supplying heavy machinery to building and construction businesses, would have never considered breaking even when he was developing new machinery for his business.

“I really think that was one of his downfalls, and though he recovered from it, it wouldn’t have happened if he had thought about what he needed to do to make sure he at least broke even.”

Now that Michelle knows what her competitors are doing and charging, and she knows what she needs to charge so she can be competitive in the marketplace while still making sure that, worst case scenario, she breaks even, she’s raring to go.

“It’s only in the last few weeks that I’ve really been quite excited to get my own business off the ground,” Michelle says. “Before that, I was really quite nervous.”

By day, Michelle is one of the Australian Small Business Centre’s support team, and by night she’s a student just like you! If you’ve ever thought about starting your own small business, now’s your chance — enrol in our Small Business Management Course today.